Seth Godin posted recently two short posts about the toxic employees and the toxic bosses. While I agree that the existence of toxic employees is mostly a management’s fault, I think sometimes they just don’t know that some of their employees are “toxic”. Тhey communicate with them from the distance of their position in the company hierarchy and they cannot feel that the atmosphere in the office has become toxic. So I would just add one more piece to Seth’s advises to the managers: Get closer to your employees and try to feel the atmosphere they are working in. It will help you to understand their relationships better.

Unfortunately, if you have a “toxic boss” Seth doesn’t give an advise what to do. I cannot give you one either. In my working experience I had a boss who you can call “toxic” only once and he was really an unpleasant person. Almost nobody wanted to work with him with a little exception of a handful of middle managers who had some shares from the company. Most of the people came and went within a period of 6 to 12 months. There was (and still is) a huge turnover in that company. I didn’t find a way to deal with him so I didn’t make an exception and I left after working there for 7 months.

However, I have another example of working with a toxic colleague that I think might be interesting for you. It was a long time ago; I was young and very ambitious and he was a little more senior than me so he felt like being my personal boss.

I started working with a technology I liked and I faced a lot of challenges in the company – mostly technical problems – that I had no patience to plunge into. As a result I increased the pace of work and I forced all my colleagues to start thinking of a better approach to our work. For example, we were a company with about 30 offices countrywide and our business was changing very rapidly so we have to update and to deploy our applications throughout the whole company very often. We had a “national tour” (i.e. business trip through all the offices to install the new versions of our applications) about 4 times a year, which was very inefficient and expensive for the company. I was the one who created a new, more efficient structure of our applications and a way of automated deployment. Well, we used floppy disks at that time (it was the age before internet) to send the new versions countrywide and to get back copies of their local databases but my approach gave the development team more flexibility, saved us a lot of time and a lot of money to the company. 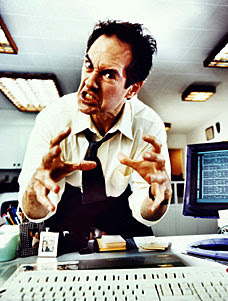 At the same time, this colleague of mine became very jealous. He wanted to be that engine that drove the company forward but at the same time he wasn’t able to propose good ideas. So, finally he turned against me and started to criticize my ideas and to find flaws where there weren’t any. When I proposed something he rejected it and proposed something else, sometimes something obviously dull but his own. Our competition went over the boundaries of normal working relationship and turned into pure hatred. He was saying: “You have to do it my way because I am your boss! If you don’t do it my way I will make the big boss fire you!”. And I was saying: “But my approach is better than yours! And I am smarter than you!”

Obviously it was not the way our relationship should go so I started wondering how to deal with him and to keep my job at the same time. Following the advice of my spiritual mentor at that time, I changed my attitude towards him and I started to agree with everything he said but at the same time forcing him to take the full responsibility for his decisions.

He wanted to be my boss but he was afraid to defend his ideas in front of the whole team. He wanted to be some kind of a “grey cardinal” – a man who rules the world from behind a curtain. I made him go into the light. When he asked me to do something I said that I don’t know how to do it so he has to teach me. When there was a problem to solve I asked him to solve it because he was smarter. When he came up with a solution I asked him to share it with the whole team and to defend it before them because I couldn’t. At some point he had so many responsibilities, so many things to do and worry about, so finally he gave up. He didn’t become less toxic – he continued to envy me but he let me do some things my way, which was well appreciated by the rest of the colleagues.

I think he was some kind of an “energy vampire” – a man who lives by sucking other people’s spiritual energy, a man who is happy when you hate him. When you communicate with such people you feel so weak and tired like you’ve been squeezed.

We tried to cope with each other but when the company went into some financial instability I quit and found another job. The funny thing is that he quit a couple of months later although he was a shareholder and wanted to climb up the corporate ladder. I believe he was missing his source of spiritual energy and left to look for it somewhere else.

So, this was my story. It would be interesting to know if you also had such stories of dealing with “toxic colleagues” and if you had – how did you make it?

If you like my blog, my writing style, or my point of view, to guarantee that you won’t miss a publication, subscribe to this blog’s content via RSS feed or via email.

« Happy Birthday To Me!
The Encyclopedia Of Business Cliches »